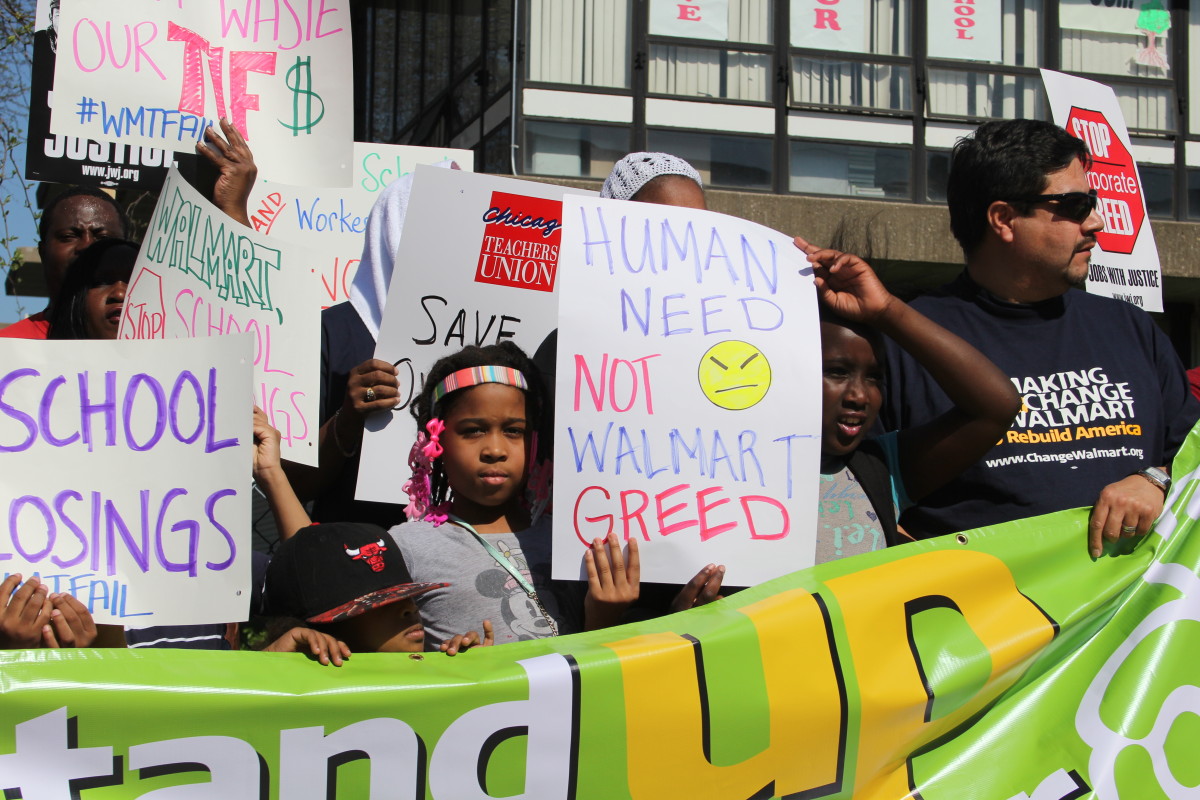 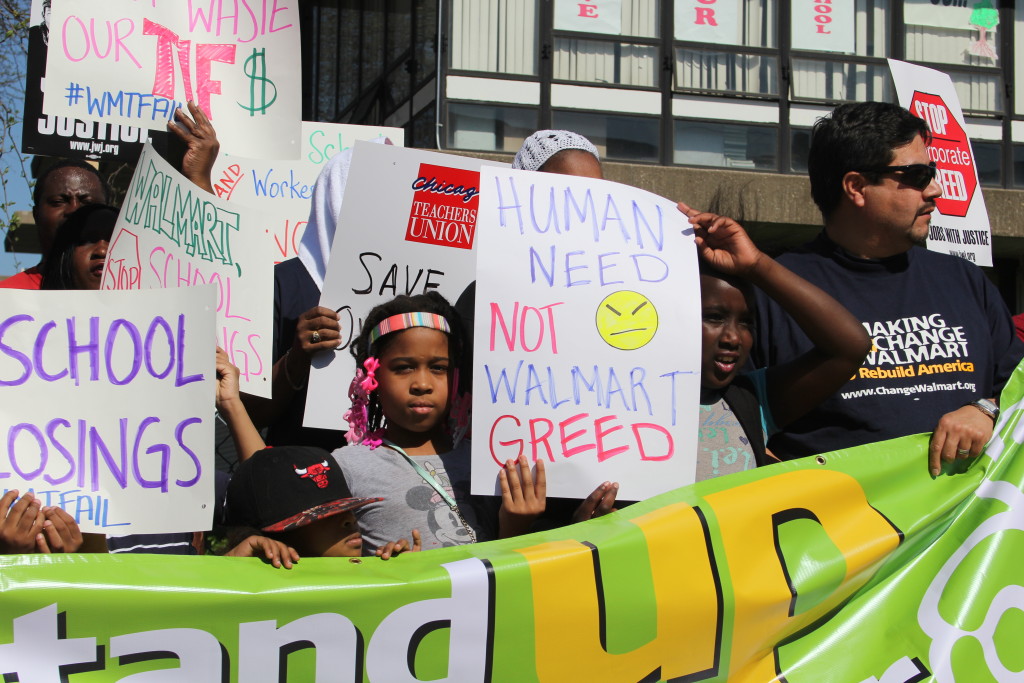 So let us now examine my thesis, namely, that the simplest way to deal with poverty’s effects on achievement is to increase the income of poor people so that they are less poor. (Berliner, 2006)

Despite clear evidence (e.g., Rothstein, 2004; Sirin, 2005) of the influence of socioeconomic factors on academic performance, current CPS policy fails to acknowledge the fundamental link between economic and other resource inputs and educational outcomes. In 2013, 42% of Chicago parents with children under 18 lacked secure employment and the poverty rate for their children was 34% (Kids Count Data Center, 2014). The vast majority of CPS students, 87%, come from low-income households, but CPS and the City of Chicago have yet to seriously address poverty as an educational issue. An increase in wages and permanent, full-time jobs with health insurance for parents is an effective way to improve student achievement. Scores on the ACT college admissions test, also used by CPS to judge teachers and schools, are highly correlated to family income, as the figure below indicates (Klein, 2014, July). The figure shows, for example, that in Mathematics, 66% of students whose annual family income exceeds $100,000 meet college readiness benchmarks. On the other hand, only 24% of students whose family income is less than $36,000 do so. These results corroborate similar results previously noted from the PISA exam. 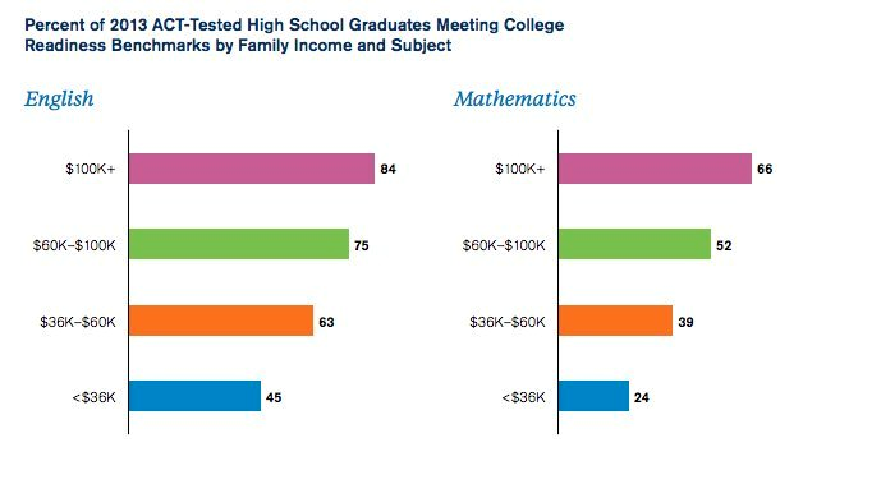 One reason is that families with more disposable income are able to give their children a broader range of experiences. Compared to low-income children, those from affluent families spend an average of 1300 hours more, in their first six years of life, experiencing and learning from places like museums, parks, theaters, and from travelling. They also spend about 400 hours more in literacy activities (Tavernise, 2012, February).

Parental income is not destiny. Within each category, there is tremendous variation. Some wealthy students are unsuccessful and some poor students do well. However, in general, higher parental income corresponds to higher ACT scores. There is an alternative to spending hundreds of millions of dollars implementing “education reforms” that enrich investors with lucrative contracts for online programs, textbooks, educational software and hardware, and push high test scores as a goal. These approaches have little positive impact on actual educational outcomes. Instead, Chicago should promote higher wages and full employment.

Results of Milwaukee’s 1994-1998 New Hope Project indicates that an emphasis on economic improvements would benefit children academically (Miller, Huston, Duncan, McLoyd & Weisner, 2008). Project administrators randomly assigned qualified parents to either an experimental or control group. The experimental group’s participants received jobs, money to supplement below-poverty wages, health insurance, and child care subsidies. Compared to the control group, which received none of these supports, children of project participants had better academic performance, were more engaged in school, received better grades, and were less likely to have to repeat a grade.

Segregation and Poverty go Together

In Chicago, as indicated in the figure below, three-quarters of Latino students and nearly 70% of African American students attend schools where 90% or more students qualify for free lunch. Only 15% of White students go to such schools. White students typically attend schools where less than 25% of students are free-lunch eligible. Furthermore, 59% of Chicago’s schools are triply segregated: by race, SES, and (because of magnet and selective enrollment schools) academic engagement. Segregation makes it more likely that those who need the most will get the least. 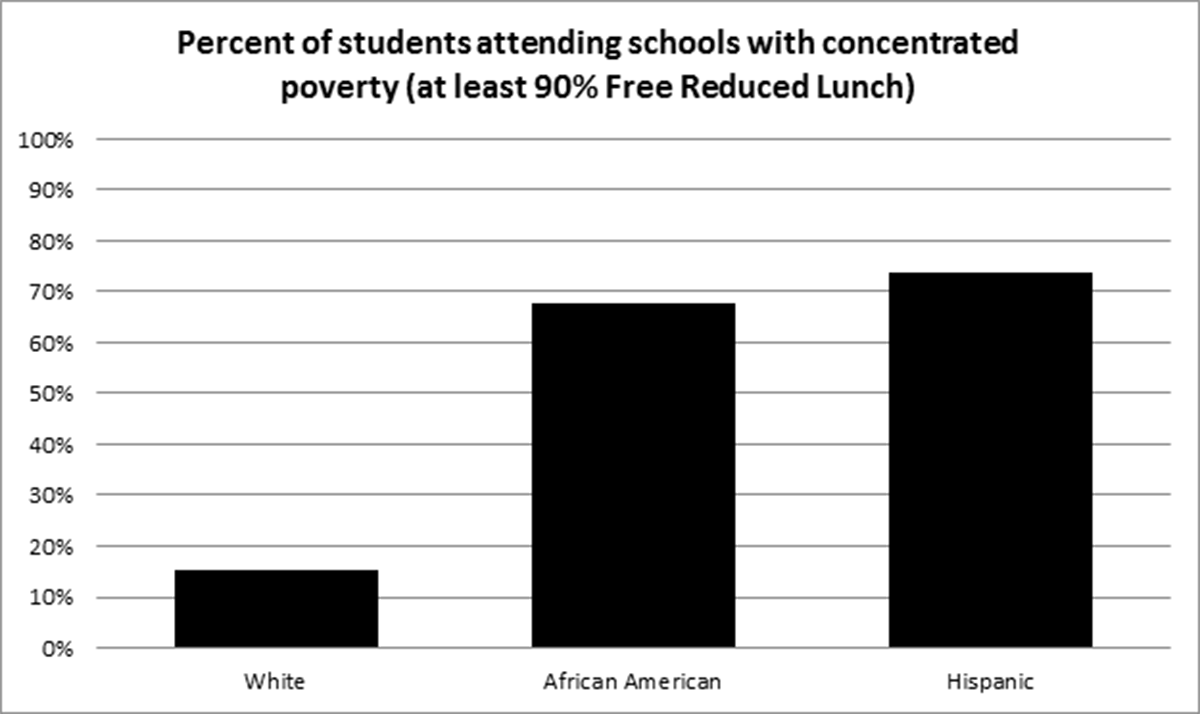 Historical and present employment discrimination results in this greater concentration of African American and Latino students in high poverty schools. Studies indicate that racially discriminatory hiring practices are not a thing of the past (Jenkins, 2007, April 22). In one study (Bertrand & Mullainathan, 2004), researchers sent nearly identical resumes in response to 1300 advertised job openings. The resumes differed only by the use of stereotypically Black or White names. The result was that resumes with White-sounding names were 50 percent more likely than those with Black-sounding names to receive employer callbacks. Other studies (e.g., Pager, Western & Bonikowski, 2009) showed that employers called back Whites with criminal records at a rate greater than or equal to Blacks or Latinos with no record!

Chicago’s workers of color have higher unemployment rates than Whites: 25% of African Americans, 12% of Latinos, and 7% of Whites lack jobs (Emmanuel, 2014, November). Chicago’s median household income varies by race as well: $65,575 for Whites, $41,979 for Latinos, and $30,918 for African Americans (U.S. Census Bureau, 2011). Examples of community differences are shown in the figures below. These economic disparities, combined with segregated housing, leads to concentrations of poor students of color in 65% of schools (CTU analysis of CPS school demographic data, 2013-14). 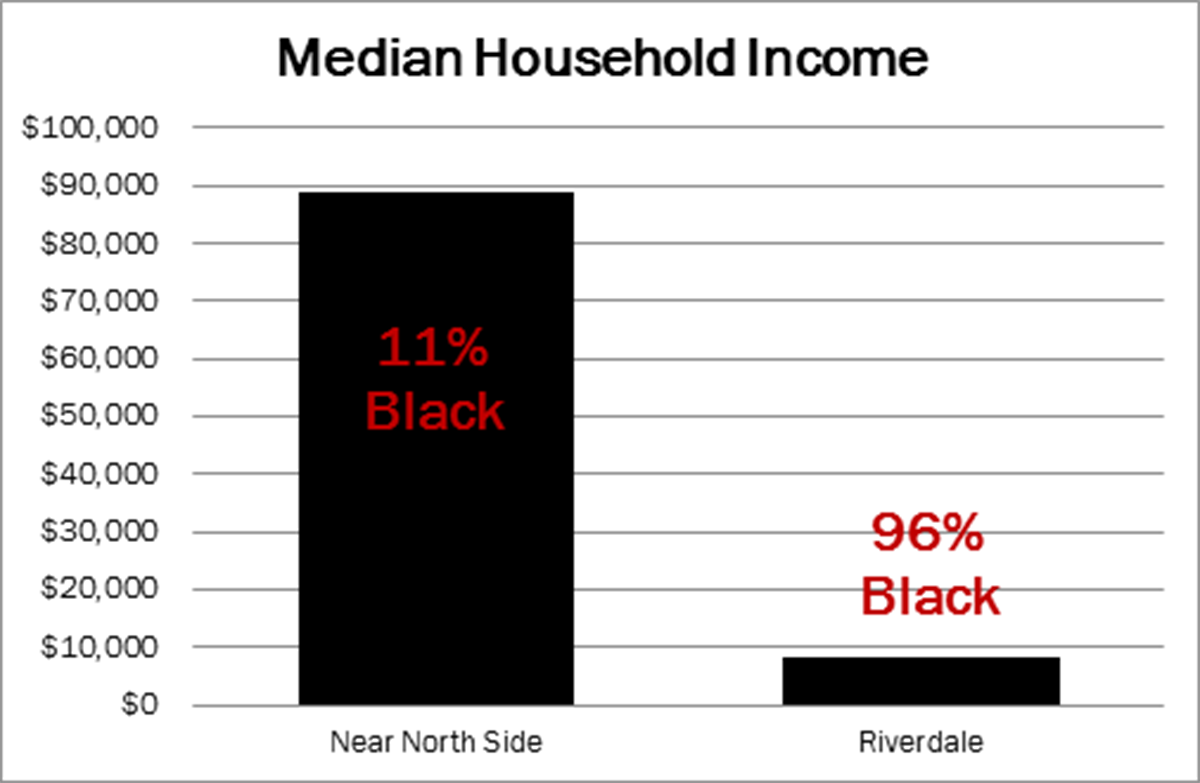 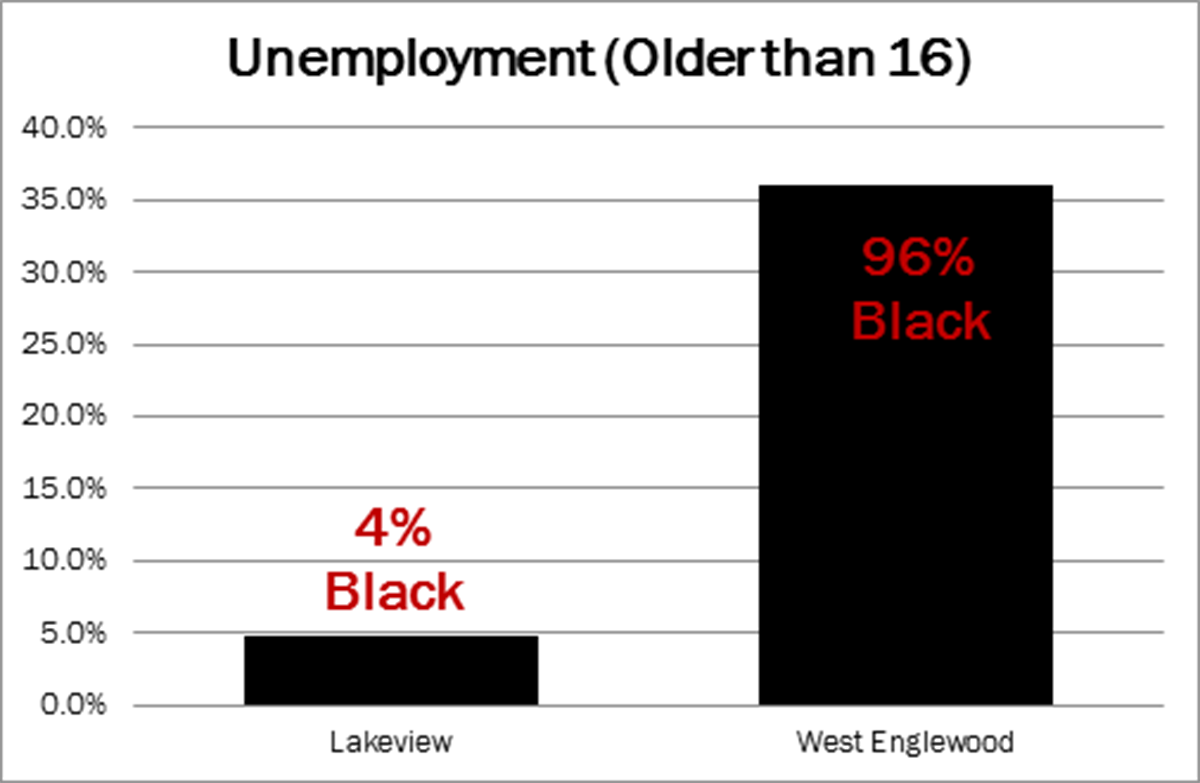 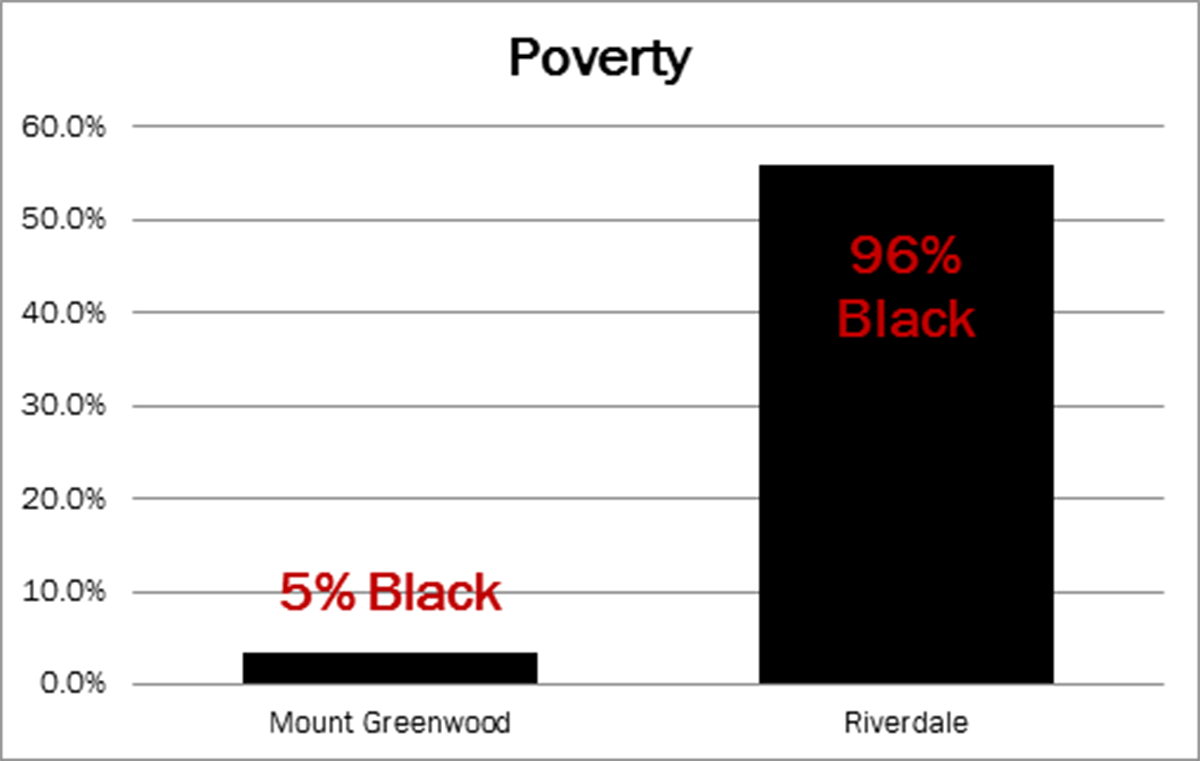 Both individual students’ socio-economic status (SES) and school-wide SES impact student achievement. Concentrated poverty affects schools because schools in poor neighborhoods must educate students without the benefit of the internal and external resources, both tangible and intangible, that are prevalent in higher income areas (see, e.g., Condron & Roscigno, 2003, on within-district inequalities in financial resources). Conversely, students who attend schools with low rates of poverty receive an academic advantage from their school composition (Rumberger & Palardy, 2005). Students from any background who attend schools where mean SES is high learn more, on average, than they would at schools where mean SES is low. (Rumberger & Palardy, 2005; Schwartz, 2010; Rubinowitz & Rosenbaum, 2000).

Students attending schools with high levels of concentrated poverty are disadvantaged in several ways. They have disproportionately fewer classmates whose parents went to college and assume their children will go also. Parent organizations, if they exist in these communities, are comprised of parents with little political power to get the school system to meet their demands. Also, many economically struggling parents are dealing with “multiple or late-night jobs, cramped and unhealthy housing, lack of heat, and insufficient food” and are unable to prioritize helping children with homework or school projects, or taking their children to city resources outside their communities (Kaufmann, 2013, February).

The striking differences in educational opportunity are clear from a study of three similarly sized Chicago high schools: Northside College Prep, Lake View High School, and Dunbar Career Academy. These high schools have similar numbers of students, but their student populations differ racially, economically, and in academic focus and opportunities available to them. As the chart below shows, much of the disparity in course offerings corresponds to class, race, and academic achievement divisions (CTU analysis similar to analysis of Collaborative for Equity and Justice in Education, 2012).

As further detailed in Appendix C, other than one course category, Dunbar Career Academy, with the highest percentage of poor students, highest mobility rates, and lowest CPS designation level, has the fewest course offerings. Northside, a selective enrollment school with less than 9% African American students, offers five times as many Computer, Art, Music, and Language classes as Dunbar, in addition to more Scholastic Teams and Clubs, Sports and Fitness Teams, Social Studies, and AP classes. Lakeview is between these two extremes. These differences are not simply about quantity; the course variety and depth is far richer at Northside compared to Lakeview, and Dunbar, a high-poverty segregated African-American school, has only the resources for basic options.

The current city administration continues long-standing public policies that bolster concentrated advantage, while doing little to tackle concentrated poverty. It is the prosperous and privileged who benefit from the dedication of public dollars to new selective enrollment schools downtown and near north, or from Tax Increment Financing (TIF) funds spent on sports complexes and economic development in non-blighted areas. It is the low-wage workers and poor who suffer when job creation is limited to corporate headquarters and upper-income tech jobs downtown, and when insufficient and regressive taxes are relied on to fund essential public services.

A just Chicago would eliminate employment discrimination and guarantee jobs that pay a living wage and provide health insurance for families of Chicago’s students. It would offer racially and economically integrated schools with vibrant curricula for all students. Instead of the current CPS policies of closing schools, attacking teachers, and giving more tests, students need policies that acknowledge the existence of and work to eradicate poverty and segregation.