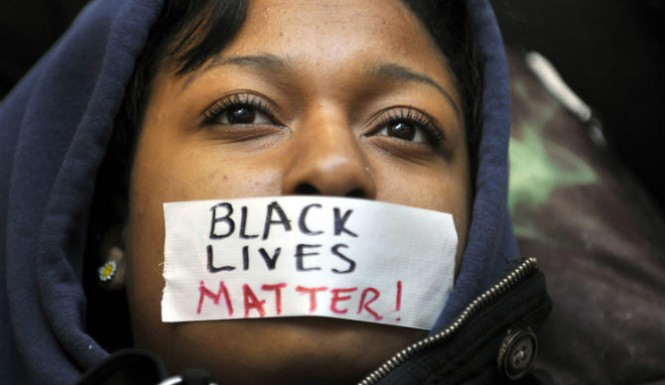 A significant factor in constraints on Chicago’s students and their families’ economic opportunities is the phenomenon of mass incarceration. Some students have no interaction with the criminal justice system, while others experience the effects of incarceration at very young ages and for extended periods of time. As Michelle Alexander explains in her 2011 book The New Jim Crow, mass incarceration is the large-scale imprisonment of African American men based on the War on Drugs, first announced in 1971. Related policy changes of the criminal justice system have played an integral part in maintaining social and economic stratification along racial lines. As the figure below shows, there has been a significant change in arrest patterns since 1980, with Black arrests for drugs skyrocketing.

Although the majority of illegal drug users nationwide are White, two-thirds of people imprisoned for drug offenses are Black or Latino (Sentencing Project, n.d.). Even more striking, two-thirds of prisoners released in Illinois each year return to seven zip codes on the predominately Black West and South sides of Chicago. (Vogel, 2012). This is not surprising, as Illinois ranked number one in the country for Black to White disparity of drug offense imprisonment (Kane-Willis, 2009). The figures below show that while drug use of Blacks and Whites (figures that include Latinos not available) is similar, arrest rates of African Americans are considerably higher (American Civil Liberties Union, 2013). 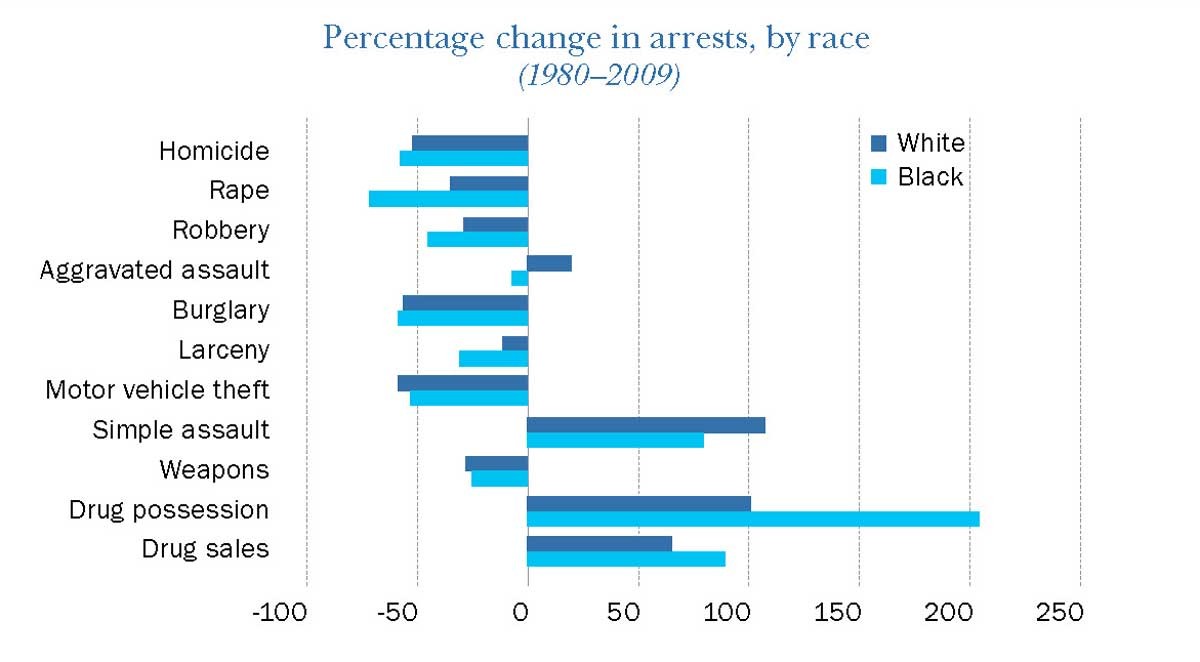 Nationally, parents of 1 in every 50 children are in prison, including 25,000 Illinois parents, most of them for non-violent offenses (Sentencing Project, 2013). The educational impact of mass incarceration on students whose parents are imprisoned is undeniably devastating. Families’ incomes can drop dramatically, as a key source of financial support has disappeared, which, among other harms, can force the family to move or live in temporary living situations. Some students are left without parents and have to go into foster care. These students’ mental health and medical needs often increase as a result of the stresses and added responsibilities due to parental imprisonment. Consequently, students are less likely to attend school, do homework, and focus on lessons.

Incarceration for drug offenses does not serve as a deterrent to drug use (Schiraldi & Ziedenberg, 2003). As an alternative, drug treatment in the community is twice as effective at curtailing drug use, keeps students from having a parent in prison, and, in Illinois, costs 63% less (Kane-Willis, 2009). In 2010, Illinois spent a total of $1.7 billion on prisons, including nearly $65 million to pay interest on money borrowed to build more prisons (Vera Institute of Justice, 2013). It is beyond the scope of this report to determine how much of that money was well-spent. However, research is clear that money spent on jobs and education, together with changes to sentencing of non-violent offenders, can greatly reduce the billions spent on prisons (Mitchell & Leachman, 2014). The money thus saved could be used to fund needed education or health services. 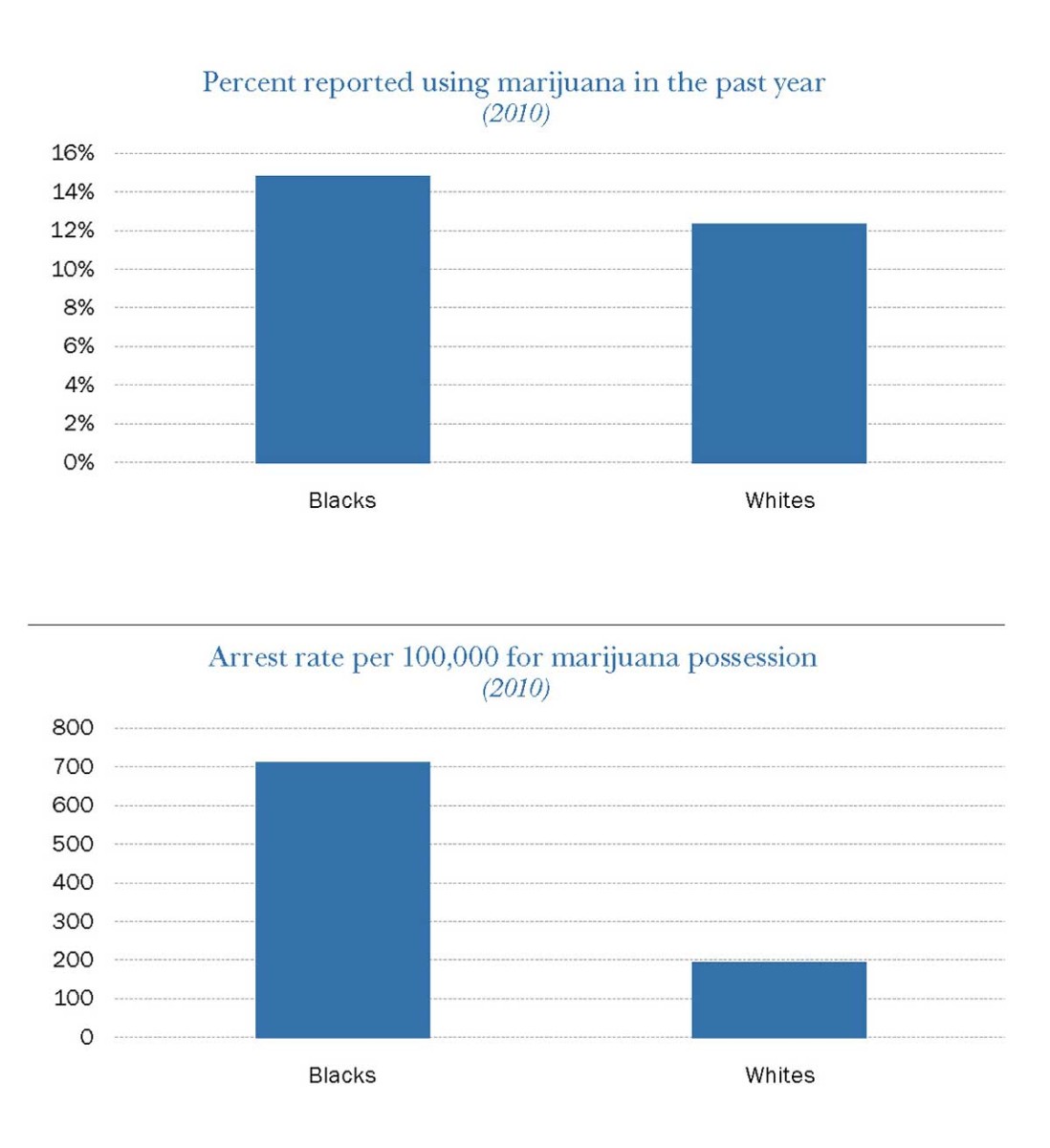 Current imprisonment policies contribute to a vicious racially discriminatory cycle, further impacting educational outcomes for children of the incarcerated. African Americans face disproportionate arrest rates over petty offenses and their employment prospects are lessened as a result. The children who grow up in households fragmented by incarceration are then less likely to do well or stay in school. This, in turn, makes it more likely they too will suffer unemployment and/or time in prison. One step in the right direction would be a decision like the one made by California’s voters in November, 2014, to reduce the classification of most “non-serious and nonviolent property and drug crimes” from a felony to a misdemeanor (Ballotpedia, 2014) and use some of the savings to fund schools instead of jails. 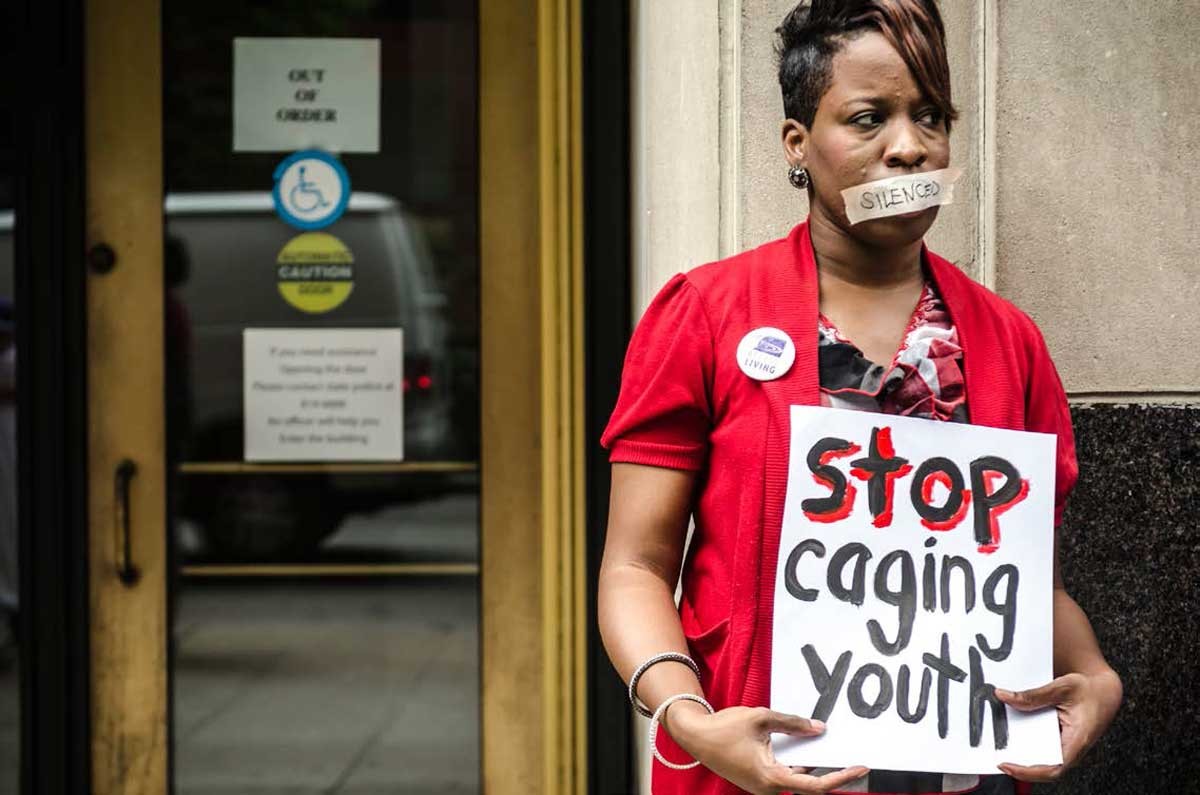 Mass incarceration policies not only rob some students of their parents, but also negatively impact their experiences in the education system. The same punitive mindset that supports arrests and jail for minor drug offenses also leads to inappropriate suspensions in schools. As with mass incarceration, there is racial disparity in suspensions also. In most states, African-American students are more likely than White students to be suspended and expelled for similar infractions, and African-American youth are more likely than White youth to be incarcerated for the same offenses (Skiba et al., 2003). In Illinois, African-American students are more than twice as likely to be suspended or expelled as White students, and African-American juveniles are more than five times as likely to be incarcerated as White juveniles. States with more racial inequality in suspensions have more racial inequality in juvenile incarceration (Skiba et al., 2003). 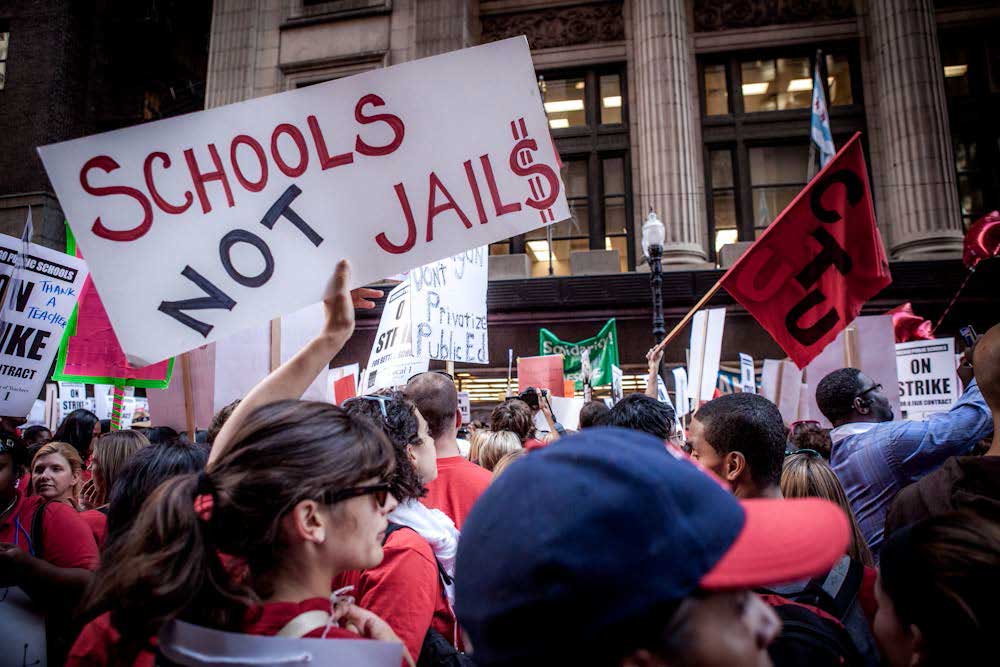 In Chicago, like the U.S. as a whole, students of color are suspended at substantially higher rates than White students, and this discipline gap has increased over time (Losen, 2011). In the 2013-14 school year, when Black students were 37% of the district school population, they were 79% of those expelled and 75% of those suspended. The charter school expansion push only exacerbates these numbers. Chicago’s most aggressively expanding charter networks, as well as the privately operated AUSL turnaround schools, are known to strictly employ and apply harsh discipline policies that lead to self-exclusion or direct push-out of low-performing students (Karp, 2012, February). The expulsion rate in charters was 11 times that of traditional Chicago schools in 2011(Zubrzycki, 2013, June).

An analysis of data from thirty-seven states on suspensions, expulsions, juvenile incarcerations, and achievement from the 2000-2001 school year (Skiba et al., 2003) points to educational harms related to these policies. Skiba et al. found that out-of-school suspensions and zero tolerance policies do not result in a better learning environment, even for the students who remain in school after a misbehaving student has been removed. Also, higher statewide suspension rates are correlated with lower average achievement scores on the National Assessment of Educational Progress. Further, suspensions do not effectively deter student misbehavior, the goal they are supposed to accomplish. Instead, they push students along the school-to-prison pipeline. As with incarceration policies, suspension policies do not solve the problem they purport to solve, and instead cause other problems, as suspended students miss days of school and fall behind in their classes. Restorative justice and other counseling programs provide an alternative to suspensions, but are implemented in only a few schools. 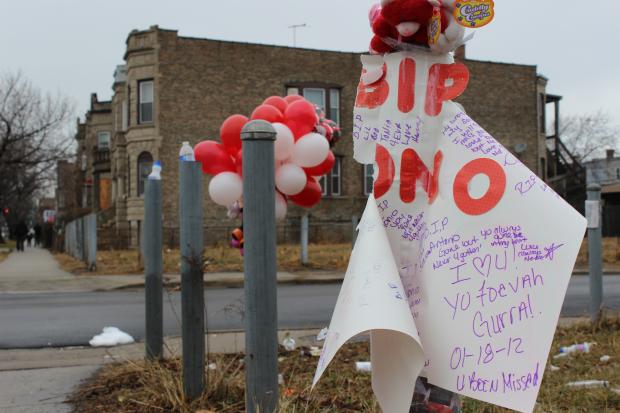 Memorial to 16 year-old Antonio Fenner, shot on Chicago’s west side in 2013. (DNAinfo/Quinn Ford)

Violence, which is increasingly concentrated in poor neighborhoods of color, also constrains educational opportunity. A recent analysis has found that community violence affects students’ test scores through increased stress and class disruptions (Burdick-Will, 2013). In 2012 alone, 319 Chicago Public School students were shot and twenty-four of them were fatally injured. The sheer number of CPS students for whom violence and risk of life are facts, negatively impacts classmates of student victims of violence. Recent cuts to mentoring programs exacerbate the problems associated with student violence (Ahmed-Ullah, 2012, June).

Family financial pressure and exposure to violence cause children stress and trauma. Both episodic and chronic stress impacts health, well-being, cognitive functioning, mental health and behavior (Grant, et al., 2003). The most effective means of protecting against such issues, even in difficult situations, is to provide a range of social supports and structures that buffer the impacts of stress and trauma (Grant, et al., 2000). The violence in Chicago makes clear the need for school-based mental health services. The reality, however is that within the educational system and in the wider community, children of color and those from low-income backgrounds face further cuts in these supports, compounding rather than challenging the disparities in opportunity.

In addition to social supports and as opposed to suspensions and arrests, evidence points to jobs as a solution to youth violence. A study of Chicago’s summer jobs program found that crime goes down when students have jobs. The study randomly assigned 1,634 student-job applicants from neighborhoods identified as having high rates of violence to one of three groups. Students in one group worked summer jobs for 25 hours a week; in another, students worked 15 hours and studied cognitive behavioral therapy principles for 10 hours; in the control group, students did neither. Researchers compared the violent crime arrests of participants over a 16-month period following the summer. They found that students in either of the two work programs had 43% fewer arrests than students in the control group (Ingmire, 2014, December). Other studies have also shown that higher employment rates accompany lower crime rates. The summer jobs program is one intervention that supports a broader point. Making sure that all youth, regardless of race, have opportunities for economic advancement has many benefits, including crime reduction.

A just Chicago would end discrimination in arrests and sentencing and provide alternatives to imprisonment for non-violent offenders. It would treat drug offenders instead of jailing them. Instead of current CPS suspension policies, which only cause more students to fail, students need additional counselors, social support services, and programs that implement restorative justice practices in the schools. Students need mentoring programs, summer jobs, and school based mental health clinics to help address the impact of neighborhood violence.