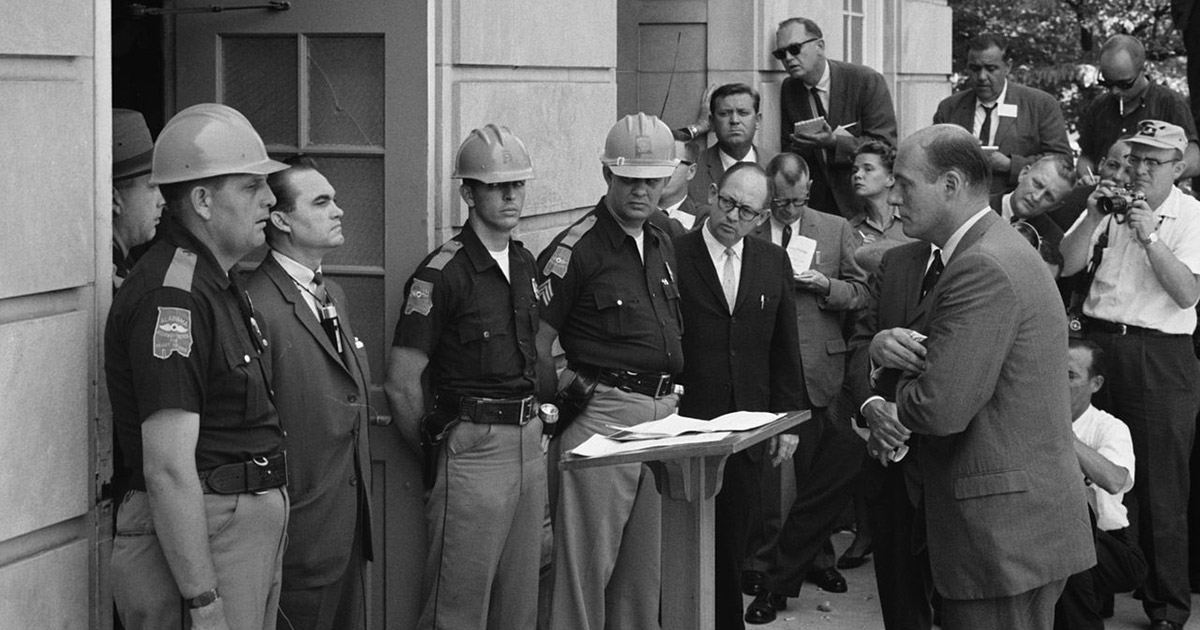 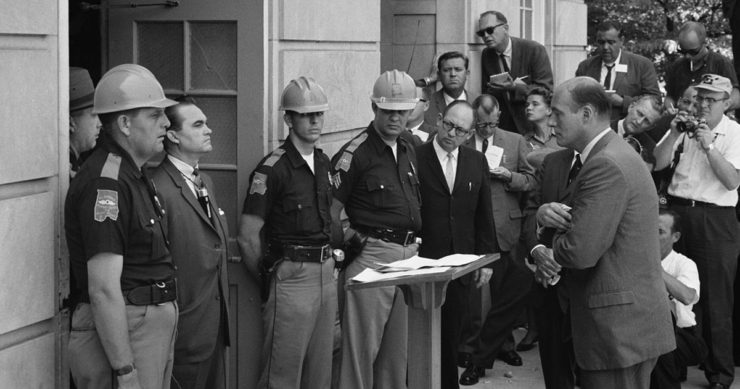 Attempting to block integration at the University of Alabama, Governor George Wallace stands defiantly at the door.

Rahm Emanuel is today’s George Wallace. Recent reports by Sarah Karp and Becky Vevea expose the fact that CPS spends hundreds of millions of dollars to maintain segregation in CPS. WBEZ analyzed the $650 million that CPS either has spent in the past six years or will soon spend on construction projects. The station’s education reporters found that these projects reflect and maintain racial inequities. They reported that:

*These categories overlap, so the numbers do not add up to $650 million.

CPS has spent millions of dollars to build new schools or annexes while perfectly good schools sat underutilized just a few blocks away. The interest on just the school construction projects already done could be as much as $750 million, according to estimates in the district’s 2013 master facilities plan.

Although in some cases there were options that could have avoided new construction costs, CPS did not consider the under-enrolled schools with high-poverty, African-American students to be suitable for the more privileged students in nearby overcrowded schools. As Janice Jackson, CPS Chief Education Officer, put it: “It’s Pollyannaish to think that just because CPS steps in with a new policy that people are going to integrate,” she says. “The same families that you’re talking about that now live in these communities have choice.”

Racism can never be underestimated, but it is cynical and disingenuous for CPS to determine, without even trying, that middle class parents would be against sending their students to a school with impoverished Black students.

School Integration works! It has a positive impact on all students, both academically and socially.

In fact, parents at Lincoln lobbied, to no avail, for a merger with under-utilized Manierre, as an alternative to constructing a $19 million dollar annex. CPS proceeded with the annex anyway. Also, parents at Ogden (14% Black, 21% low income) and Jenner (97% Black, 99% low income) proposed a merger to relieve overcrowding at Ogden and make use of Jenner’s underutilized building. The Jenner community rightfully wanted assurances that neighborhood students would still be able to attend the school. (When Ogden moved into the old Carpenter School in 2009, Carpenter was phased out and neighborhood students had to attend Otis School, a half-mile away.) Even without these assurances, CPS refused to move forward with the merger, apparently to appease some loudly vocal racist Ogden parents. CPS ignored the fact that the merger was supported by the majority of Ogden parents.

School Integration works! It has a positive impact on all students, both academically and socially. Yet, CPS is determined to continue its segregationist policies. CPS has turned its back on the thousands of students it has relegated to schools that are triply segregated: by race, income, and academic engagement. These schools are regularly under attack — they are threatened with closure (and are the vast majority of those already closed), denied needed resources, and subjected to a revolving door of failed programs.

You wouldn’t know it, but CPS actually has had a policy since 2005 regarding school attendance boundaries that says:

B. Current and Projected Racial and Ethnic Composition of the Schools Affected

Where feasible, DSP shall propose establishing or revising attendance boundaries to maintain or promote stably desegregated enrollments in each of the affected schools and to avoid the creation of one-race schools.

In reality, CPS has fought integration at every step of the way. In 1980, (26 years after school segregation was to have ended) a federal court ordered desegregation in Chicago. By 2009, the order ended, supposedly because too few white students attended CPS schools to make desegregation practical. Now it is 2016. CPS has an opportunity not only to do something that will improve students’ education, not only to show leadership and to put a crack in the legacy of segregation, but also to save money! Yet, the district refuses to do so. Mayor Emanuel’s vision of 21st century schooling looks an awful lot like Sixties-style racism.