How Should We Fund Schools in Illinois?

Contrary to the claims of some econometric reformer types, money matters in schools. The ongoing budget cuts at the state level and the Chicago Public Schools budget that’s “balanced” with $480 million in mystery money on top of deep cuts to traditional public schools point to the real negative impact that insufficient revenue to schools has on our students’ opportunities to learn. Contrary to some media outlets (cough *tribune* cough…), Illinois is not broke. Illinois has the fifth-largest economy in the country and indeed one of the largest in the world. The Chicago area alone accounts for almost $550 billion in annual economic activity, and of that, CPS’ budget is about 1%. Add another 0.3% and we’re not having a conversation about our students losing out. Instead, we’d be discussing how everyone could have a full and robust curriculum. And this isn’t some fantasy. Chicago is subject to forces that districts in all parts of the state are subject to, namely inequitable and insufficient funding. But our plight does not have to be. Other states’ approaches to funding schools point the way toward viable fuller and fairer alternatives. This post points to three great options for addressing Chicago and Illinois’ school funding challenges.

School funding comes from three primary sources: state funding, federal funding, and local funding (usually property taxes). Chicago’s challenges come from worst-in-the-nation funding from the State of Illinois, combined with a relatively low local property tax rate that is “capped” by state law and corporate giveaways like the TIF program, property tax abatements, toxic interest rate swaps, and an aversion on the part of guys like Rahm Emanuel and Forrest Claypool to ever force wealthy people to pay anything close to their fair share.

To understand why Illinois and Chicago don’t have to be like they are, we must survey the national picture of school funding. The annual publication “Is School Funding Fair?” by some of the foremost national experts on school funding and the source of the following data, lays out the grim reality in several parts. 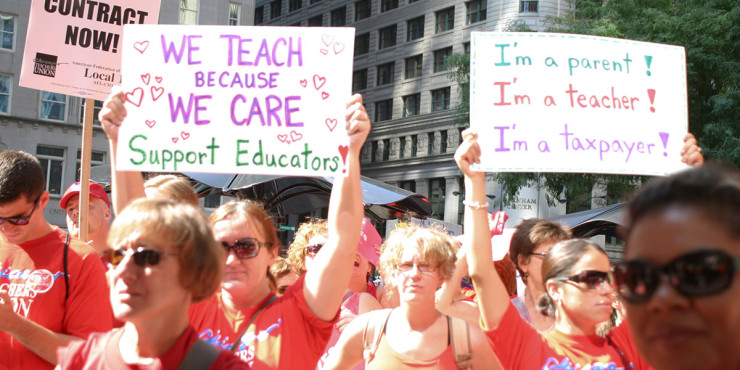 The report rates Illinois 16th nationwide in available funding for schools, but that number masks two major and related problems. First, the State of Illinois is worst in the nation in the proportion of school funding that comes from the state government – about 30% statewide, compared to more than 50% in many states. Low funding from the state means that school districts have to obtain operating money elsewhere, almost always through property taxes. Illinois’ property taxes are high precisely because the state provides so little school operating revenue.

Illinois’ low share of state funding for education also results in the second problem. The overall amount of school funding hides the grossly unfair and unequal distribution of that money between low-income and high-income districts. Data available from the Illinois Report Card allows us to clearly see how unfair school funding in Illinois really is. New Trier High School in Winnetka, for instance, has only 4% low-income students and spends more than $21,000 per student. John Hope High School in Chicago’s Englewood neighborhood, has 97% low-income students, spends $8,000 less per student, and was subject to huge budget cuts this school year. Given the amount of poverty in Englewood, at a minimum those per-pupil expenditures need to be equalized if students at those schools are to have anywhere close to similar opportunities during and after high school. Some places fare even worse than Chicago. Marion High School, in far southern Illinois, has 41% low-income students and spends only $8,000 total per student, less than 40% of what students at New Trier receive. The disparities occur because of property wealth—Winnetka has a lot of it, Marion does not, and Chicago is trapped by a tax cap and politics.

Given these numbers, the report gives Illinois an “F” in funding distribution. This rating is based on the wide disparities between districts and the empirical reality that students from low-income homes, students with disabilities, English learners, and other harder-to-educate students require more funds. Illinois’ school funding formula means that students who are already ahead receive larger proportions of funding than students with more challenges. From page 9 of the “Is School Funding Fair?” report: 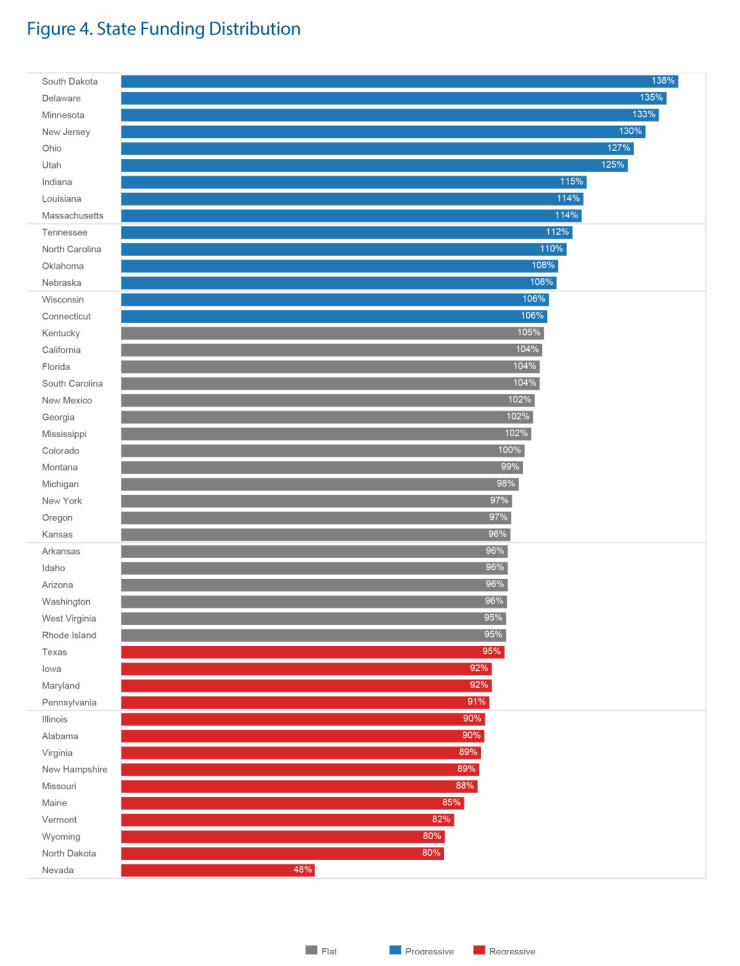 This chart explains that Illinois funds schools regressively, as students with greater needs receive only 90 cents on the dollar that more advantaged students get. Maybe Governor Rauner doesn’t need to push a right wing agenda so hard – we’re already in Missouri territory!

To contrast, the states that do well by the students most in need ensure that students with the highest learning needs receive higher proportions of education funding. Of the states with “A” grades, we will focus on three as possible models for a new Illinois school funding formula.

Massachusetts is held up as a national model for school outcomes, as the state regularly leads the nation in scores on the National Assessment of Educational Progress (NAEP) and international assessments. Massachusetts rates high for school funding fairness, and importantly for Illinois, has a flat state income tax (MA at 5.15%; IL at 3.75% and formerly 5%). Massachusetts has a weighted student formula so that students from low income households, students with disabilities, English learners, and other higher-need categories receive additional funds. The Massachusetts formula also takes into consideration differences in costs between districts, similar to one proposed in the Illinois General Assembly. Importantly, local contributions to school funding are determined both by property wealth and by income. This component is important because property values (and therefore taxes) have increased more quickly in recent years than incomes have grown. By taking income into account, too, the formula is more responsive to changes in the economy. Furthermore, the state provides a much larger portion of funding, so school districts with lower property values can still have access to sufficient funds for schools. Finally, when MA shifted to this formula, they were sure to add additional money into it, thereby avoiding the situation of winners and losers that proposed changes to Illinois’ school funding formula created. 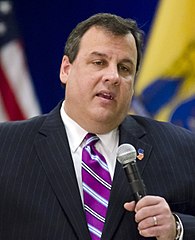 Even NJ Gov. Chris Christie hasn’t been able to make New Jersey’s education funding as unequal as it is in Illinois.

New Jersey is a school funding model for two main reasons. First, New Jersey directs some of the highest amounts of money toward funding schools. Second, because of a thirty-year legal effort to equalize school funding, school funding in NJ is subject to what are known as the Abbott court decisions. The Abbott decisions include two crucial components regarding school funding: first, schools in low-income urban areas must receive parity funding compared to wealthy suburban districts; and second, that additional money must be targeted toward instructional and curricular measures that work, like early literacy programs (as opposed to, say, gambling on interest rate swaps…). The legal battle resulted in the School Funding Reform Act of 2008 that created a single, weighted formula to ensure that more dollars go to students who are most in need of the money. When NJ made the change to this statewide formula, the state legislature injected an additional $500 million into the funding formula, again avoiding the conversation of winners vs. losers.

Part of the reason that NJ is able to fund this approach is its graduated state income tax system that includes higher rates on filers who make more than $500,000. Perhaps because of this system of taxing those most able to pay, Republican Gov. Chris Christie has pushed for big cuts to the money available for NJ’s public schools. The NJ Supreme Court found the first round of cuts was unconstitutional and required half of the $1 billion in cuts restored. That said, the funding formula in NJ continues to be underfunded and cuts in NJ have harmed traditional public schools in a couple of ways that are familiar to Chicagoans: it cut funding to the formula while simultaneously sending an influx of cash to charter schools. That said, NJ continues to have one of the highest average per-pupil expenditures in the country, and its state funding formula remains one of the most fairly distributed.

Minnesota serves as a model for Illinois in many ways—the biggest being the state’s push for progressive revenue. Rather than follow the status-quo, trickle-down nonsense that tax breaks for rich folks will result in a better economy for everyone, Minnesota followed the opposite path: it’s raised taxes on the highest earners and used the additional money for public services. Far from a Kansas-style dystopia, Minnesota is stomping its neighbors economically. (Unfortunately, Governor Rauner hired the advisor from Kansas… but I digress.) A rational system of taxes and other smart development decisions have meant that Minneapolis has grown much faster than Chicago—despite its having even worse weather.

Minnesota’s school funding approach differs a bit from MA and NJ in that there are multiple strands to the formula (as Illinois has now), but the way in which the funds are distributed ensures that students with higher needs receive more funds from the state and that the funding distribution is fairer. In fact, in Minnesota, students with higher needs receive 33% more funding for schools. That money can go toward wrap-around services, additional instructional supports, and full and rich curricula that research shows is crucial to improving student outcomes. 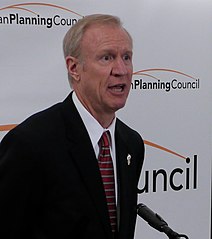 Illinois has a revenue problem, and Minnesota points the way toward a solution. Students in Chicago and students in Marion deserve the same as students at New Trier. If Illinois were to adopt MN’s tax rates, the state would have billions of dollars in additional revenue, with the vast majority generated from those most able to pay. Those additional billions could go into a school funding formula that is truly adequate and equitable, as the examples of MA, MN, and NJ show. CTU supports, and will continue to support, a legislative approach that recognizes the need for revenue and for funding fairness.

Kurt Hilgendorf is a history teacher on hiatus and currently works in the Chicago Teachers Union’s research and political departments.
View all posts by Kurt Hilgendorf →