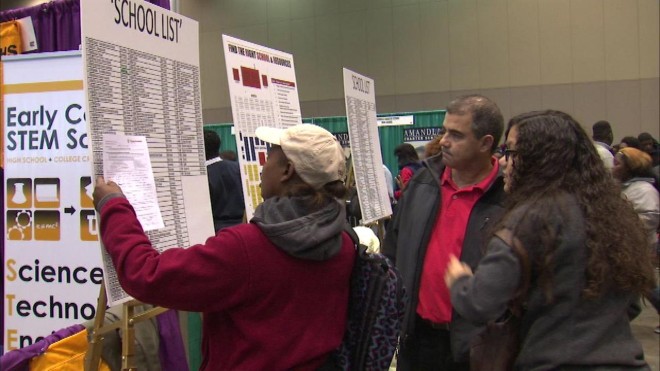 At both the elementary and high school levels this, the nation’s third-largest school district, gives students and parents the option to apply to schools other than their assigned neighborhood school. CPS encourages families to “Research, Choose, and Register” within a matrix of charter, contract, magnet, International Baccalaureate, and selective enrollment schools, just to name a few. Because of the vast number of students and families affected, Chicago Public Schools’ system of school choice has received attention from observers city- and nation-wide.

(You can read Dr. Pattillo’s article at the Du Bois Review on Race if you have access to it through a university library or other means.)

Dr. Pattillo interviewed 77 poor and working class Black parents, guardians, and parent figures of students who entered Chicago high schools in the fall of 2007. In the summer of 2007, once students and families had decided on high schools, Pattillo asked parents for their retrospective accounts of navigating the school choice system during the previous year, probing to see how much control, empowerment, and agency parents felt in the process. In other words, Pattillo asked parents what happened when they tried to “Research, Choose, and Register.” It’s impossible to do justice to the rich research study in a short post, and I don’t attempt to do so here, but Pattillo’s findings (some of which I summarize below) enhance our understanding of Black parents’ experiences with Chicago schools in the era of choice and point to necessary avenues for future research, discussion, activism, and reform.

Pattillo interviewed parents from one traditional public high school and one charter public high school, both in the same predominantly Black neighborhood. To protect the identities of the schools and families, Pattillo calls these schools Neighborhood High and Charter High. Although the parents of students who ended up in Charter High were slightly more advantaged than Neighborhood High parents on measures like education, income, employment, and access to internet and a car, Pattillo found that both sets of parents had similar experiences finding high schools for their children. They “shared similarities in their emphasis on quality and access, experienced similar barriers and constraints, and similarly found the process confusing and burdensome.”

Parents sought quality schools for their children. Their definitions of quality included academics, disciplinary culture, and safety in and around schools. But, many of the poor and working-class Black parents “saw their options as limited” when they tried to find a school that met their criteria. A Charter High mother said: “I was just looking at the schools that I might wanna consider out of, you know, the lesser of the evils because I didn’t like any of ’em…outta these I have to pick something.” All the Charter High parents said they chose the school, meaning it met at least some of their quality criteria, even if it wasn’t their first choice. Things were different at Neighborhood, where 19 percent of parents reported having chosen it and 38 percent of parents let the assignment process play out. The other 43 percent said they were assigned to Neighborhood even though they preferred another school, which Pattillo argues demonstrates the lack of empowerment the choice process affords Black parents.

On the journey to these outcomes for their children, Black families also faced myriad barriers to accessing quality schools. The study shows how issues like joblessness, lack of transportation, poor health, and single parenthood impacted Black families’ school choices. One father, Mr. Lloyd, told Pattillo that his oldest son had gone to Neighborhood High and gotten in with the “wrong crowd.” A second son had been fortunate to graduate from Benjamin Mays Academy (also a pseudonym). The Lloyds wanted their third son to go to Mays as well. But, the school was far from their home and the Lloyds did not own a car. The family had been able to pay for public transportation for their second son to get to Mays until he was old enough to work and get a car. However, this had placed a financial burden on the family, and Mr. Lloyd was now out of work. Mays Academy was therefore infeasible for their younger son, who had to enroll at Neighborhood High despite his father’s reservations.

The study also reminds that school choice isn’t just about parents making choices. Schools choose students, and, by extension, their families. Test-based admission was both a source of frustration—for parents who did not feel it was fair that schools could deny their children admission based on test scores alone—and misinformation—for those who incorrectly believed that all choice schools based admission on test scores, when some charters and career academies in the city don’t do so. That said, schools that are not selective enrollment in the strictest sense make choices, too. Such schools choose students and families by, for example, only selectively responding to inquiries about the school. Pattillo relates, “[R]oughly one out of every seven parents reported getting no response from one or more schools to which they applied.” A parent referred to as Mr. Nelson went to the CPS School Fair and signed up for every school he thought would be good for his son. Mr. Nelson did not receive return correspondence from a single school: “I didn’t receive nothing from none of the schools…no flyers, no nothing…None of them.” Mr. Nelson was left to call schools individually and ask high school students he saw on the bus what their schools were like.

Even parents who successfully enrolled their children in Charter High said the choice process was stressful and daunting. They attributed their positive outcome to luckily being chosen by Charter, not choosing Charter with a sense of control, empowerment, and agency. Pattillo writes that multiple Charter High parents reported praying for months that their children would be accepted, offering prayers of thanksgiving once they received positive word, and that “both sets of prayers wore them out.” Charter High parents also expressed sadness for other students who had not been chosen and would attend a low-performing high school where, in the words of a Charter High mother, they would be “basically just left at a school pretty much to drown.”

Dr. Pattillo joins others who have called for improvements to neighborhood schools so that all Chicago students and families have high-quality educational options available to them. The argument that “applauds a little hard work as an acceptable price to pay for a quality school,” she concludes, “minimizes the disproportionate toll that searching for a school takes on families for whom even bus fare can pose a financial challenge; and legitimizes the logic that accessing a quality public good should require work in the first place.”

Jordan Conwell is a doctoral candidate in Sociology at Northwestern University, where his research focuses on issues of racial inequality in education. As a research intern with CTU since 2013, he has contributed to many projects, including the original A Just Chicago report. You can read more about his research and his work with CTU on his blog.
View all posts by Jordan Conwell →