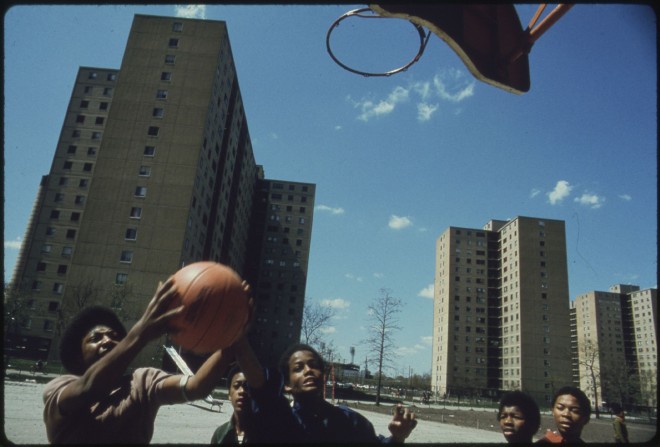 On July 8, 2015, the Obama administration affirmed new housing rules aimed at our country’s legacy of segregation. The ruling, Affirmatively Furthering Fair Housing (AFFH), is intended to help local leaders better identify segregation and address the effects of social isolation by ensuring residents’ access to needed resources and services. This is in response to the Fair Housing Act of 1968 and the struggles that many communities have faced reversing the decades of government policies promoting segregation. AFFH will provide cities that receive HUD funds with ‘unprecedented’ technical assistance, such as demographic data and a new assessment tool, to identify fund recipients’ progress in reducing segregation, increasing housing options, and advancing inclusivity.

Racism and segregation in Chicago are not issues of more data and new assessment tools. The political maneuvers and the way local interpretation/implementation of housing policy have been used to maintain segregation in Chicago through planning and development have been well-documented by social scientists for decades. Lack of access to data about local demographics or proof of practices that violate the Fair Housing Act of 1968 are not the problem. Racism and segregation in Chicago are largely due to failed political leadership, undue influence of developers, and a lack of accountability to citizens. In terms of the CHA and the worsening of housing segregation and unaffordability, responsibility ultimately rests with the mayor.

The Chicago Teachers Union’s recent report, A Just Chicago: Fighting for the City Our Students Deserve, outlines the housing crisis that the families of Chicago public school students face, connecting housing and school segregation with instability and a lack of funding. Highly segregated African American and Latino schools are the product of residential segregation. These schools lack the funding and staff necessary to properly serve students from segregated and high poverty neighborhoods, who are already suffering from a lack of resources and services. This lack of resources is strongly connected to poorer outcomes in school and later in life. Indeed, these are the kids Obama is referring to when he says, “A child’s course in life should be determined not by the zip code she is born in.” A version of this line has been repeatedly used by Obama administrations officials with regards to the development and unveiling of these new rules.

The release of AFFH follows on the heels of a recent Supreme Court decision which upheld the use of disparate impact claims to trigger enforcement of the Fair Housing Act, meaning that certain policies may disproportionately negatively impact minority groups. This is commonly referred to as institutional racism. Prior to this, fair housing enforcement was only triggered by discriminatory intent where minorities were overtly barred from accessing certain housing. Needless to say, the ruling by the conservative Roberts Court was a pleasant surprise for many fair housing advocates and civil rights activists. Clearly, AFFH should be considered a legal victory.

‘Enlightened technocrats’ love this ruling, too. They tend to believe that social problems are due to bad policy and that good policy is simply a question of good data. On the ground, this means that recipients of HUD funds will have to “show their work” as they use the new assessment tools and data provided by HUD. The hope is that this will provide an extra layer of accountability.

What this ignores, however, is a historic unwillingness to enforce the Fair Housing Act and the everyday attempts by housing agencies to side step it. Indeed, as ProPublica’s investigation of the enforcement of the Fair Housing Act reveals, there are only two instances from 1974 to the present where HUD withheld funding for violating the Fair Housing Act. Worse yet, there have been numerous instances where HUD has continued to fund communities which have been sued for discriminatory housing practices by the DOJ and/or have been found by courts to promote segregation. What we are talking about here is a wasted opportunity to leverage billions of dollars to fight housing segregation.

Furthermore, throughout the ProPublica piece, government officials repeatedly describe the failures of enforcing the Fair Housing Act as a problem of political will.

The Chicago Housing Authority (CHA) is already plagued with problems. As Sarah Hainds wrote in a previous blog post (Rahm Emanuel Continues to Displace Low-income Families, July 10, 2015), the CHA is sitting on $440 million in cash reserves despite a crisis of affordable housing and nearly 300,000 families on the CHA waitlist. Part of this inaction is due to instability at the top. Recently, Emanuel appointed his fifth CHA CEO in four years. As the Sun-Times notes, the new CHA CEO, Eugene Jones, left his last job as the head of the Toronto Community Housing Corporation under a cloud, including accusations by the city ombudsman of creating a climate of fear in the agency as well as a general failure of effectively leading the agency. His biggest defender: embattled former Toronto mayor Rob Ford. This fits Emanuel’s pattern of appointing hatchet men.

Matt Hoffmann is a researcher, organizer, and educator in Chicago. He is an adjunct instructor in the social sciences at Loyola University Chicago and the Illinois Institute of Technology, teaching classes that focus on the environment, inequality, community & economic development, and social justice. Hoffmann also serves on the metro organizing committee for Faculty Forward Chicago, organizing with contingent faculty at local universities.
View all posts by Matt Hoffmann →