Children Murdered at the Hands of the Legal System 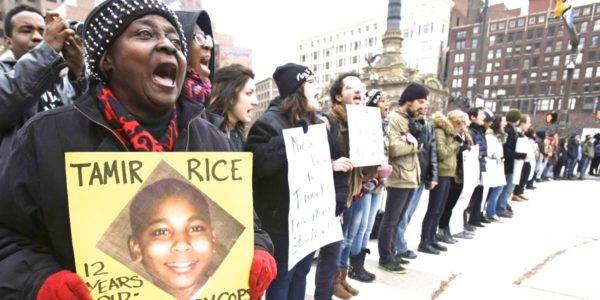 A Just Chicago reports on the educational damage suffered by children whose parents are incarcerated. It discusses the disproportionately high suspension rates of Black students, and the “school to prison pipeline”. A more gruesome aspect of the racist injustice system is the murder of children, particularly Black children, at the hands of the police and the courts.

An article by Alexandros Orphanides, The Dehumanization of Black Children, provokes sadness and then anger. He quotes Manning Marable on the murder of a pregnant woman’s unborn child at the hands of a lynch mob, one of the 3500 mostly Black people, killed this way from 1882 to 1927:

When a murdered Black sharecropper’s pregnant wife intended to press charges against her husband’s killers, an angry mob accosted her, hanged her from a tree, lit her on fire, and with a knife “ripped open the abdomen in a crude Caesarian operation. Out tumbled the prematurely born child. Two feeble cries it gave — and received for answer the heel of a stalwart man, as life was ground out of the tiny form.”

Orphanides compares this murder to that of Tamir Rice, the 12-year-old boy killed by Cleveland police who were:

Just one and a half seconds after arriving and without warning over his vehicle’s megaphone, police officer Timothy Loehmann shot and killed Tamir. That the gun, a plastic air-soft gun, was probably fake was never communicated to the police. That he was a child was never articulated to or by Loehmann. That he was Black was.

The fate of Kalief Browder, perhaps less known, is no less tragic. He was arrested at 16 for theft of a backpack, spent three horrific years in New York’s Rikers Island, and then was discharged after they finally dropped the charges. His jail experiences haunted him, and at the age of 22, he committed suicide, pushed over the edge of the cliff by the racist injustice system.

Black children are 18 times more likely than other children to be sentenced as an adult; they are widely dehumanized and more prone to face police violence. Similarly, in Illinois schools, African-American students are more than twice as likely to be suspended or expelled.

Academic inequities will not be eliminated, as long as these life-altering and life-denying practices are allowed to continue.